Recently, I was playing around with dart and got to know that it supports output of various types. So curiosity arises that which one would be fastest.

So to find out that I used basic hello-world sample

After that, I wrote the bash script 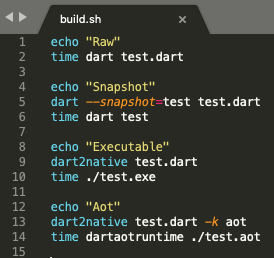 On execution of this shell script, I got this 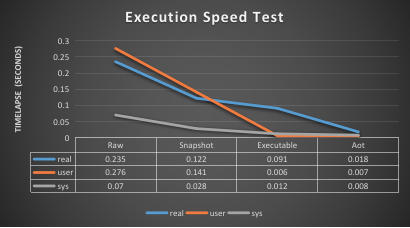 The speed in descending order would be like this,
AOT > Executable > Snapshot > Raw
So the execution speed of AOT is fastest whereas Raw is slowest.
Posted by Abhishek Kumar at 12/30/2020 07:55:00 AM No comments:

Email ThisBlogThis!Share to TwitterShare to FacebookShare to Pinterest
Labels: dart

Instead of using very + another word, find single word

Instead of using, very + another word, you can always find a single word that's more precise, descriptive and elegant.

List of A to Z words with 'very' and equivalents

Here I'm sharing an incident that happened in 2017, when I had managed to solve a mission critical problem using reverse engineering and what I have learnt from it.

The incident was when I have been allocated a migration task. My whole project was migrated to webpack from system.js due to which integration build generator broke. So I got this task to migrate that integration build generator too and make it compatible to webpack within a week. I knew that I got this after another colleague failed to complete it in previous sprint. So there was a higher chance of missing the deadline because half of the time was already got consumed by previous colleague. I got this issue when it was about to be escalated in case I fail.

I thought if I'll go by the same path as my colleague then I may get the same result that he got. So I changed my strategy and look into the problem by reverse engineering it. Well, doing that gave me enough hints to solve the problem and fix the generator by having minimal impact. So after doing further analysis, I'd managed to fix the issue in 40% less time than was initially expected.

From this incident I learnt that sometimes it's good to see the problem from reverse angle instead of just front view.
Posted by Abhishek Kumar at 1/21/2020 07:22:00 AM No comments:

How to secure Cordova based hybrid Android mobile app?

The incident I'm sharing here was happened in 2015, when we faced a complicated technical problem while working on an IoT project.

We were having a mobile app to control smart electronic appliances that consumes our web-service. A third party group somehow managed to use our mobile app with their service. We assume that they had reverse engineered to crack the services. So we had to protect our mobile app which was Cordova based hybrid cross-platform app.

I have been allocated to analyse this issue and propose a solution. So during my initial analysis I found that first we should secure the mobile application installer because Android's .apk installation file usually packaged together all the resource files used in the hybrid project. Crackers could reverse engineer it to get those files. I know that we can ensure protection only by increasing the level of security.

So I minified all the files, bundled together and applied obfuscation over it; which made hybrid portion bit more secure. After this I used Arxan to protect the mobile app at binary level.

The next step was to ensure the service authenticity; for which I'd used session based synchronous incremental token validation system on app level and get it implemented on a web-service layer to support it.

The outcome was that our app become much more secure & protected. It took few releases till all the users updated the app. Now the third party has stopped supporting our app as we don't see any cross origin requests in our logs.

From this incident we learned that usually we think that the project is at startup level, so they don't worry much about security and protection of the project initially. But with time project grows, it becomes more vulnerable. So we should always keep in mind the basic things like security; during the startup phases.

Now I use this app protection technique in all other enterprise level apps and try to get it implemented during the startup phase.
Posted by Abhishek Kumar at 1/21/2020 07:13:00 AM No comments:

Why did Vedic Mathematics originated?

What do you think, why did the vedic mathematics originated?

According to the popular beliefs related to Ancient people in Indian sub-continent that since they did not had access to paper or similar material where they can carry out long calculations. So they would require to carry out whole calculations mentally because any kind of calculating machines was out of question in those times.

Well the real reason is way beyond that, which is related to our saints and maharishis of those times. By studying the scriptures of ancient maharishis, we came to know that almost all the maharishis were like scientist and were great yogis.

In ancient India, maharishis used to separate their soul out of their body but still linked to their respective bodies using advanced yoga techniques that might be related to kundalini yoga or something similar.

Similar, soul-out-of-body concept was shown in the "Dr. Strange (2016)" movie that they called astral form.

Soul neither have mass like weight nor have any dimensions like width or height. So being a soul maharishis can go anywhere even inside atom or outside earth. There will be no physical limit.

For your ease, you could consider the movie, "Honey, I Shrunk the Kids (1989)" where Wayne Szalinski, the inventor tries his best to get his recent invention, a shrinking machine, to work. Things go awry when he accidentally shrinks his children and throws them along with the garbage.

The plot of this movie is very much related to the scenario we are discussing about like when those children became so small that even the ant seems to be size of elephant; in that situation consider measuring the height of those ants or grass they hopped without having a scale or inchtape. Well without having any instrument to measure it would become a lot much difficult task unless you know the Mathematics, in fact Trigonometry and Coordinate Geometry to be specific.

Anyways, being a soul you can not write anywhere. So how would you carry out complex calculations like:

Some of you might question that why didn't they return back to write their observations somewhere and then again go back as soul to observation. It would be difficult because, even for yogis this whole process takes time. So going back and forth would be out of question.

Thus, they would have to devise mental mathematics techniques to acheive their respective goals.
Now we call that 'Vedic Mathematics', after sadguru sankaracharya first wrote it down in the form of book.

Speed test of wasm at node vs deno vs wapm

Recently, I have created an app in Rust language for macOS then to make it cross-platform, ported it for other platforms using WebAssembly.

I have ported the app for these platforms:

Initially, I had made it on macOS where it runs very fast but on Windows it gets slowed down so much that is clearly visible.

So I tried to measure it somehow for which I took a command for the app which decodes the input parameter. Here is that command,

Where the application versions used for each platforms are

So I got the data, which after processing gave me below table after 5 iterations on each platform at Windows.

In the above, table cell values are given in seconds.

Below is the plotted bar chart for this table. 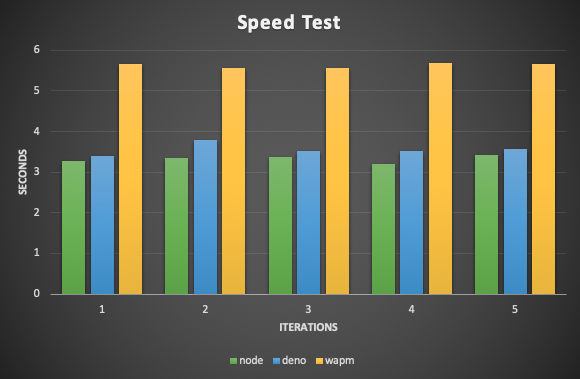 As you can see in the chart the speed of node is highest while of wapm is lowest.

So the speed in order would be like this,

The wapm is wasmer based package manager and wasi runtime.

Abhishek Kumar
I'm fun-loving, smart & adventurous guy. But my friends call me a logical guy. And they're right I think, that's why I do research on everything, no matter what it is. I can't help it. Because my brain always question WHY? to whatever it won't understand. Moreover I think my sun-sign would tell more than what I can? ... ;)

My Other Interesting Sites & Links