Introduction
Scrypt is an alternate writing system inspired from the 12480 Alphanumeric System. But it is completely different from 12480 system because of its most important feature, that its symbols can be derived from the one base symbol. So it is completely logical & does not require memorizing any symbol. Due to which it is very easy to encode & decode, by following the rules.

12480 Alphanumeric System
12480 was designed in 2002 by Bradley Tetzlaff from Waukesha, Wisconsin, USA. It was invented for both use in a computer game named Ecclemony (1E78) and as a basis for constructed languages. It was also designed to show how a true alphanumeric (it is used here to describe the combination of an alphabet and a numeral system) writing system looks and works.

Logic behind the name – Scrypt
Scrypt is an alternate script in essence. So to represent this, the spelling of the word ‘script’ has been modified at one place, from ‘i’ to ‘y’, that represent alternate but it’ll pronounce similar to the original word ‘script’.

Symbol Creation
Each symbol is made up on binary number logic of 0 & 1. More conveniently we can call it, Hide & Show logic, where, 0 represents Hide & 1 represents Show.

All the symbols are based on the Fig.1, 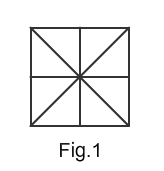 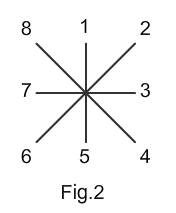 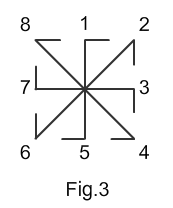 Each bit (from left to right) of a byte is represented by a line (Horizontal/Slant/Vertical), like in Fig.2, where each number denotes the position on bit in a byte. If a bit is 0 then hide the corresponding line otherwise it won't. Hence a blue print of a symbol is created. Now to give each line a uniqueness, put another line just after the line, as shown in Fig.3. A symbol is now near completion. Just increase the length of second line little bit, so as to touch the corner/center-of-edge of virtual square. In short it should fit in the Fig.1.

Let us take an example to create a symbol,

In English,
ABCDEFGHIJKLMNOPQRSTUVWXYZ
In Scrypt,

The quick brown fox jumps over the lazy dog.

Demo: The English to Scrypt converter

Abhishek Kumar
I'm fun-loving, smart & adventurous guy. But my friends call me a logical guy. And they're right I think, that's why I do research on everything, no matter what it is. I can't help it. Because my brain always question WHY? to whatever it won't understand. Moreover I think my sun-sign would tell more than what I can? ... ;)

My Other Interesting Sites & Links